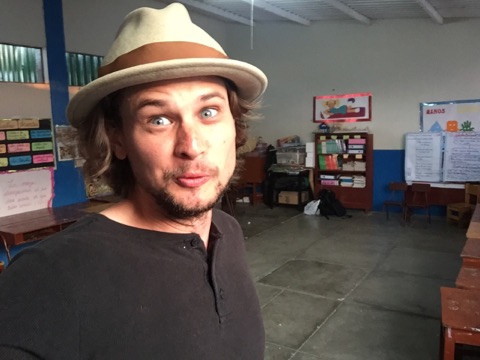 Right now I am in an odd mood. It’s almost…a flat feeling. Yet I don’t know why. I should be feeling fantastic.

I’m in Peru learning to teach English and tonight was my first class. I taught English to Peruvian teenagers. It started awkwardly.

The classroom had a tin roof, a wall of grills on the side (windows with no glass) and a picture of Mother Mary in pride of place on a shelf at the front of the room.

The first two children arrived to the class 15 minutes late and when I started writing on the board the first time I dropped my pen. I used the bend and snap but at the top of the snap my head hit the shelf where the Mother Mary picture stood. It hurt.

I didn’t realise until after the lesson that the force of the blow caused the picture to fall forward.

It got worse when students kept steadily coming in, some 40 minutes later. I thought ‘ stuff it!” with the order of activities I had planned, and kept it to the same active exercise we planned at the start.

I made sure new students entering the classroom during group work were divided among the more experienced students. I get why my teachers were so cranky that I was 5-10 minutes late to class. It really affected my development and what that teacher could do.

But as my students went on and absorbed more I found myself talking less, letting the students take the lead.

At the end when I finished one of the brighter students handed me my pencils I had lent him.

“Thank you,” he said, smiling at me, in perfect English.

I have felt amazing several times. I have walked on a catwalk to applause, and made people laugh at my stand-up comedy. I thought these were great feelings.  But it was not like the glow I had inside me at that moment. It was a burn and this burn was purpose.

Still, purpose or not, I went straight to the bar afterwards with my fellow teachers.