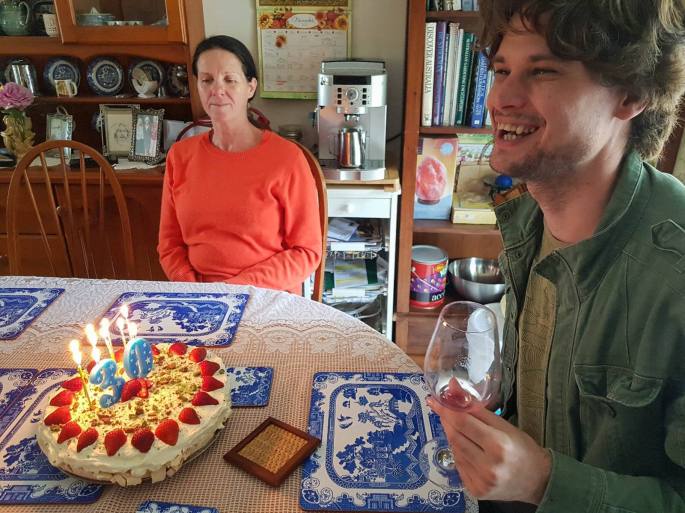 Back in early high school of the early noughties, when I liked Playstation 1 and Wheatus, there’s one moment I recall in between bland vacant times of no meaning. My teacher’s aid was having a bad day. She was turning 30. “I’m old,” she said, miserably. She was cool, someone allocated to keep an eye on me given that I was on the educational radar – the one to watch out for, a sign of troubling behaviour. She lent me her Playstation games, like Spyro and Crash Bandicoot: Warped.

I turned 30 today, and I’ve been struggling for weeks to write something that was a combination of humble-bragging of my past and a declaration of my positive future. It’s 6pm and I haven’t had a shower, and I’m having dinner with my colleagues in 55 minutes. There’s not a lot of time to write something, if I want it published on my birthday.

I’m tired. I just returned from Perth, where I visited my family for a few days. My mum drove me back to the airport and on the way we stopped at Grilled for burgers. And I told her how I feel that it hasn’t been the same since I returned from South America seven months ago, that everyone around me is starting to look old, even my younger brothers.

She gave me the look. The one where her lips are pursed, her eyebrows are raised, and is considering an “mmmm”. And she said, “well you’re not a kid anymore. You’re an adult. When you were in your 20s you could pretend to be, sort of. But you’re not.” And I had to absorb that for a moment, because in my heart I’ve thought I have the best of both mindsets, where I have experience in my profession, but am young. I guess I felt that everything I was doing was training me, preparing me, building me for something else in the future, when I was in my prime, when I’d have it all figured out and controlled.

Since I came back from Peru, I haven’t felt that. I’ve felt that where I am now is who I am. And I’ve felt a bit flat over it, as I see that I’m still not having much of a social life, where I’m still struggling with work at times and balancing the feelings of inadequacy that comes with it, with the occasional sense of pride that I know exactly what I’m doing. And I’ve felt that everyone else my age, and younger, have established themselves, have their voices too, and are prepared for this world that constantly is being branded as more frightening and dangerous, in its various forms.

As I continued eating my burger, I carried on with my rant to mum. “You know what the population is? 8 million. Sorry. I meant 8 billion. It wasn’t that long ago, maybe when I was in high school in 2006, when we were told it was 6 billion.”

In that time that has been another 2 billion people who now exist, who soon will indirectly compete with me for resources, food, and are part of a collection of experiences that I won’t be able to relate to.

“Haven’t you ever felt the same?” I asked mum, who would by my count be 48. She shrugged, as if she either hadn’t thought of it, or had long ago taken such a thing for granted.

While the population itself doesn’t directly impact why I’m 30, or the significance of it, I am saying there is a lot that can change in three decades, and even in 15 years.

I was fostered for three years when I was 10, and I left home when I was 15. It was only the other week that I realised the odds of going to university and completing a degree was low if you were fostered, and when I look back to the kids I knew then, I know that I have accomplished much. People over the years have said I’m hard on myself.

I guess what I’ve done though, in the meantime, ever since my Beenleigh Centrelink careers adviser helped me apply for university, is avoid stability. It’s only since Peru that I’ve even taken out a bond, and rented on my own. I kept a job in Mount Isa for more than three years, and I told myself I would serve that time, but I questioned it every six months.

I’ve always wanted the chance to escape, or have a choice to do so, without feeling bad about it. And I can still do that. Being 30 doesn’t change that. Reaching 30 doesn’t really mean anything. It’s a milestone year. And milestones help us to reflect on what we did and what we want to do.

That’s where I should wrap it. And I will. Today I didn’t do much. I tried out cricket powder in my breakfast cereal. I signed my rental lease for another six months. I bought an expensive pair of jeans from a store that offered me a 20 per cent discount because it was my birthday, only I didn’t see it until after I made the purchase. I bought Star Wars: The Last Jedi, and tried watching it. It’s not a good movie.

And really. That’s it. And I’m about to go out for dinner. And I’m okay with that. But I’ll have a birthday party in two weeks. It won’t be tonight, because I work tomorrow.