Blurred from late nights, restlessness, inconsistent yet heavy meals in the limbo after Christmas, I wasn’t sure I wanted to leave the house for New Years Eve.

But the mother of my girlfriend had cooked a roast pork, and I was hungry. So I was lured to the nearby grandparents’ place. I am glad I did, because it was a more sociable time than the New Years Eve before.

There was a lot better food too! There was the pork, some sort of Russian salad, bread, gravy, and rice (of course).

Five minutes before the bell tolled midnight, everyone was handed cute little bags of grapes. “How strange,” I thought, remarking on the ribbon decorating the plastic. So I opened it and began eating.

All the family stared at me and, basically, asked what I was doing. I shouldn’t have been eating the 12 grapes yet.

At midnight on every stroke you have to eat a grape, make a wish, and then eat another. You basically have to shove grapes down your throat to do it in time. I’m not sure the conditions in getting these wishes, and so nobody told me you can’t tell anybody (at least in English), so I wished for health, safety when I travel into the jungle, and happiness, and love, and comfort for my family back home. Damn, I should have asked for a second Nintendo Switch!

The loud banging in the video is from all the fireworks that are going off from the tops of buildings, and in the streets, around us.

And then, if this wasn’t already the strangest thing, everyone grabbed pinches of lentils and shoved them in their pocket or their wallet. It symbolises money. 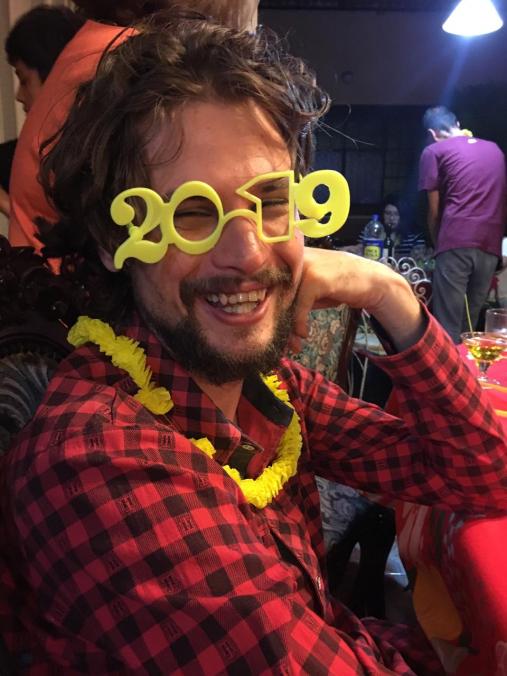 I’m unsure if this is traditional Spanish colonial tradition, a remnant from times before, or possibly from the family’s Chinese heritage.

The fireworks continued to crack on the streets and above various houses. It seems from my observations that certainly families or households stock up on their fireworks throughout the year and then, at midnight on Christmas Eve and NYE, let them crack.

But over the years these families have competed with each other with the longest lasting, and the best fireworks displays. Their competition has evolved into fucking mind games with each other in an effort to be the last ones burning up a strong display.

At 12.30am there were two houses in different directions clearly mindfucking with each other, because their displays were fairly quiet. Building A on the far end of the park brought out a great display of gold, blue, and green that would have suited any agricultural show back home in Australia. And then they waited. Waited. Waited for the other building close to another side of the rectangular memorial park to make its move.

15 minutes later they were all fucking going for it, deafening my ears with their final annual showdown.

This might be my last blog post in a while. I’ll be backpacking through the Amazon for the next three weeks. I’m not taking my laptop and I’m unsure how the reception is going to go.

It’s a sudden awakening. There are howls and whistles and screams and cracks and yelps from fireworks. My bunk mate Andy below me shouts and we get out and rush to the third-floor balcony to check what is going on.

In the day I would look out from the bottom of a valley – seeing buildings and streets clinging to the steep hills overlooking us. At 12.01 Christmas morning a roar of fireworks are being lit from these streets up into the night, all layered together with cracks of greens and reds and blues. Each street of Peruvians seem to compete against each other for the main attention.

It is the most glorious thing I have seen. I am frightened but laughing and reaching for my phone to Facebook Live this moment. Our street is included as a cluster of neighbours light up their rockets which pass above our faces. Andy and I roar expletives and between the ‘holy fuck’s and ‘Feliz Navidad’s I am laughing, and laughing, and laughing, and it is a moment, by this hill in the night, bright and explosive and loud, I will not forget. Within eight minutes I had the best Christmas of my life – and there was nobody but strangers to witness it with.

The show is slowing down 10 minutes later and Andy and I rush to see if the plaza on the other side of the building might have better fireworks. We run out the front door. The group of neighbours see us as they are lighting fireworks. They shout something with the word ‘gringo’ in it and a rocket hits alarmingly close to me. It’s most likely ‘get the gringos!’ and Andy and I keep jogging up the street.

Earlier that day in the plaza I watched an incredible dance. A brass band walks up the closed street guarded by frustrated police officers holding batons and riot shields. These police officers have been watching the Christmas Eve shoppers all day and I swear by the end a few of them want to take a swing at someone, just to have some fun, just to vent their frustrations at the rudeness.

The dancers take their graceful steps. Most of the dancers look like the ‘Big Bad Banksia Men’, but in the likely event you don’t know Australian fairy tales, I must avoid metaphor and describe them properly.

There’s 20 dancers in black masks which have red lips and grotesque blue eyes. One of them has an unlit cigarette in his mouth. They wear wide brown sombreros and heavy boots, and they clutch folded whips. There are two dressed in clown masks and they hold some boom-shaka-lakas (okay, I’m making up a word but it’s appropriate) which make grinding noises as they wave them around to scare away the pressing crowds who want the closest angle to take videos and photographs with their cameras. Some of the mothers are even using their children as cute hostages to get in closer. That doesn’t stop the threatening clowns from holding back the circle. The clowns have no mercy. You know why? Because they are clowns.

Arm in arm with the biggest and ugliest mask is a beautiful woman with icy eyes and a rosy smirk (who can resist such a woman?). And they proudly lead the dance with casual struts. A boy who can’t be more than seven-years-old is dressed completely in a white cow costume and he dances too, and closes in on the main couple. They are a cute family there, in that main street, in front of the plaza and the fountain and the glorious church.

And as they dance to the trumpets the sun shines on a spot on one of the mountains tipped with snow high beyond us. And this moment also is glorious.

Nobody can possibly be so lucky to have two amazing moments in the day.

Some of us seem to think sex or even alcohol is the answer to replace hurt or unwanted memories. Maybe so. I happen to love both, and tried both, but they tend to be an expression of my mood. They don’t exactly create happiness if I don’t already have it.

The trick is to find another way, and maybe at long last I’ve figured it out. The trick with coming to Peru or overcoming pain in life might not have anything to do with finding yourself as it is to be more of yourself.

I’m not talking about being ‘more’; ‘more healthy’, ‘more athletic’, ‘more sexy’, ‘more wealthy’, ‘more knowledgeable’, ‘more desirable’, (more superficial). I know, I know, this is all a familiar tangent of the self-righteous, and I’m sorry about that.

But what I’m talking about is having more moments like the fireworks in Huaraz on Christmas morning. The majestic moments that burn in your brain you can’t ever forget, so that they become you. Those moments where you remember laughing, the ones which weaken everything else that came before it.