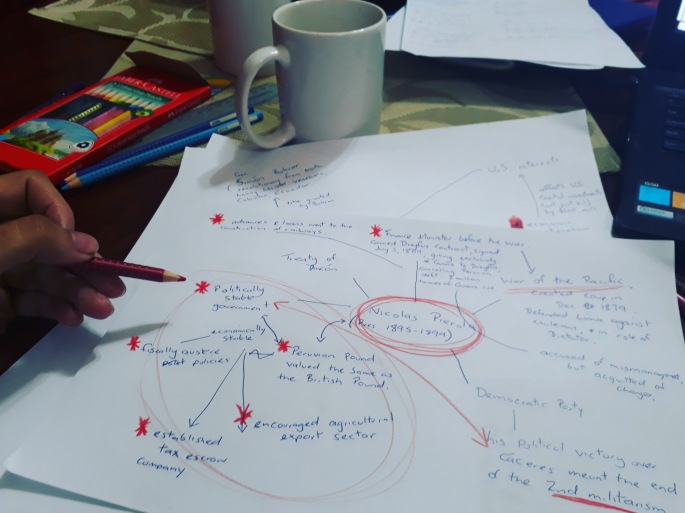 This morning I did some research on three Peruvian Presidents from the 1960s to the 80s. Two of the presidents led their military and eventually took over from their predecessor.

But as I gain a superficial look at the history of Peru from the 19th century and its independence and until the 80s, I see a pattern. The pattern comes down to the economic exploitation from foreign ownership and control; whether Spanish, English or from the US.

The story of three presidents (Fernando Belaunde, Juan Velasco Alvarado, and Francisco Morales Bermudez) I looked at seems to centre around the control of true economic independence, through the ownership of oil. At the heart of this is the world’s first giant oilfield to the north of Peru, La Brea-Parinas, with the title given by famous revolutionist Simon Bolivar, who is credited for the independence of several Latin American countries.

There are huge gaps in my knowledge (and it all comes from Brittanica.com and the Association for the Study of Peak Oil and Gas) but at some point the U.S controlled company International Petroleum Company owned this oilfield, and gained a favourable deal through an agreement with President Belaunde in the mid 1960s. This caused much anger and inspired Minister for War, Velasco, to use his militarist position, to usurp the position of the civilian president.

Velasco took over as president and placed everything under government control. He nationalized everything for what might be considered true economic independence. In doing so he stripped away the nation’s assets of the International Petroleum Company, including the oilfield, without compensation, and created nationalized company Petroperu.

This decision pissed off the United States and across all industries affected the country’s investments by $600 million, and Peru’s economy. Militant leader Bermudez usurped Velasco, (whoever lives by the sword) who had been affected by ill health and died two years later. Bermudez eventually encouraged foreign investment and focused on a plan to place the government back under civilian control. He announced an election and in 1980 ran against the former civilian president, Belaunde.

The irony is that Belaunde won, but to Bermudez’s credit he stepped back and handed over the power.